A modern barn with lots of light, air and short walking distances

Jurian Kosters lives in Germany, where he works and farms with his family. However, he has not completely severed his ties with the Netherlands. Kosters, who emigrated to Germany from the Dutch city of Lochem in 1999, not only works as a dairy farmer but is also an agricultural emigration agent. He assists Dutch farmers with purchasing a business in Germany, something that takes him to many a farmyard. When building his own barn, he took both his Dutch background and his new German homeland into consideration.

Kosters has been farming in Selsingen (Lower Saxony) since 2002. After various renovations of the old barn and outbuildings, the decision was made in 2009 to build a new barn. "However, the global crisis and the poor milk price caused the plans to be put on hold," Kosters explains. The application for a building permit was not submitted until 2014 and in 2018 that the consent was finalised.

"Landholding security was another reason for putting the plans on hold. In order to be able to build a financially healthy business, it is important to have sufficient land at your disposal". When a farmer in the neighbourhood retired, the opportunity presented itself to buy additional land. This ended up accelerating the process and provided the final nudge for building a new barn.

"Labour is expensive in the Netherlands and this is reflected in Dutch farming practices. Efficiency is always taken into account." Jurian Kosters, from a mixed farm with dairy cattle, pigs and poultry, did not receive any agricultural training. His father told him that for the most part he could learn how to farm from advisers. A good understanding of the economic aspect of the business would help him in the future. Jurian completed the MEAO (Senior Secondary Commercial Education) course and this background enabled him to write his own business plan for the new building - a 'straightforward barn' with lots of light and air, good visibility everywhere and short walking distances. 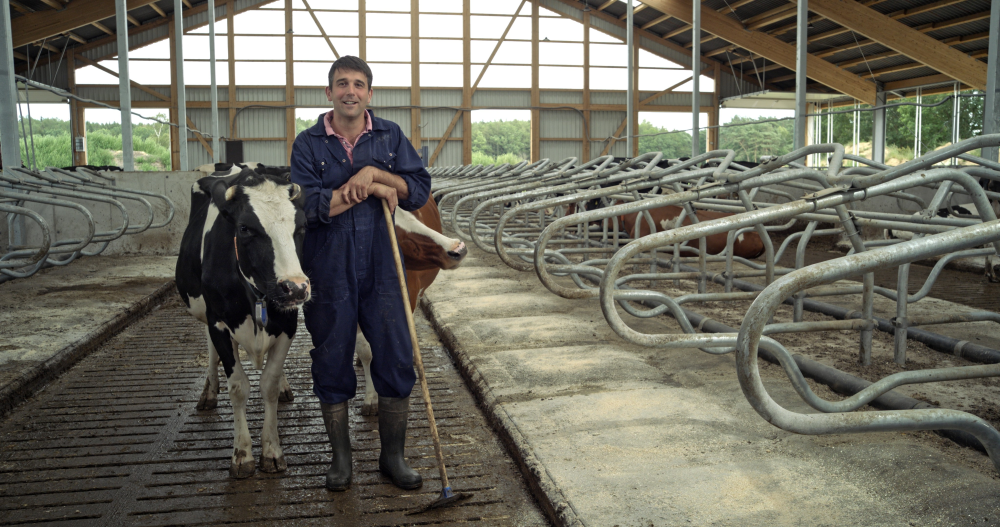 The barn was built in a 0-6-0 layout with three DeLaval milking robots. "I think it's important that the cows stay in one group with several robots. If a robot fails, the cows can still be milked. That's efficiency."

For the cubicle bedding, convenience was also a consideration. Waterbeds were considered the best choice. As Kosters explains: "Deep litter would involve a large amount of labour or machine costs on a daily basis." The strategy, after all, is for the farmer to achieve his results with the minimum possible amount of work. When planning the interior of the barn, we consciously looked at the jobs that recur on a daily basis. "Every part of the barn is clearly visible because there are few columns throughout the area. We use a simple feeding system with a maximum of 3 rations and the feed front gives us adequate possibilities to secure the herd or just to separate a single cow. Using a robot for milking gives us peace and quiet in the barn and the cows end up suffering fewer injuries. With robot milking we do run a slightly higher risk of incomplete milking and milk leakage, but the milk that has leaked out runs nicely from the waterbed.”

Currently 175 cows are being milked with the help of his father and one employee, and 25 are dry. At least 57% of the cows are heifers. "We recently bought 40 heifers. They weren't used to a milking robot, but after only a short while peace returned to the herd." With the new barn, it will be possible to achieve an increase to 220 dairy cattle. At this moment there are 100 yearlings on the farm. The work on the 110 hectares of land is completely outsourced.

Kosters has had a good relationship with Spinder dealer Taute GmbH in Papenburg for at least twenty years. "It was logical therefore for us to enter into discussions with them for advice and a quotation before fitting out the new barn. If the product and the contact are good, they will keep my loyalty." At local trade fairs, they did look at the stands of other manufacturers, but their choice of Spinder was only confirmed by this. The quality and finish of the products were the deciding factors. 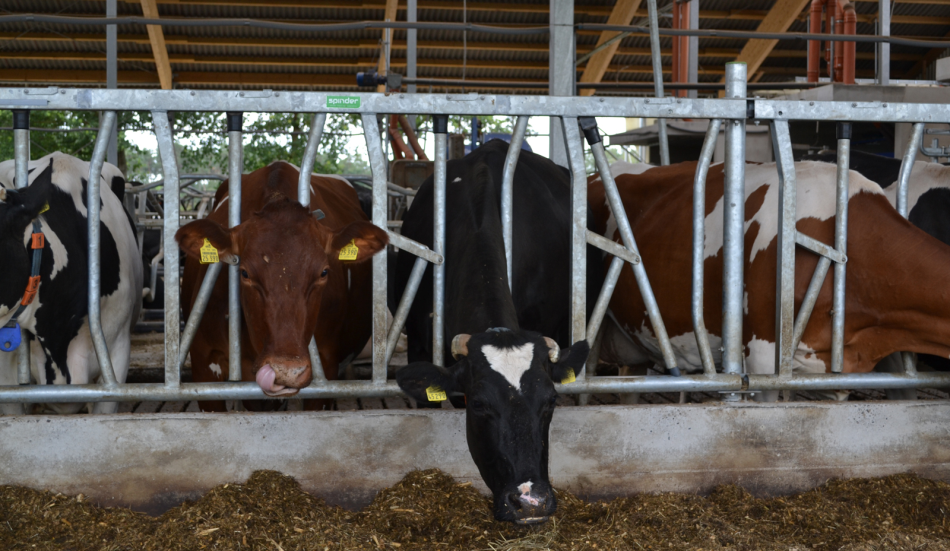 The feed front does not have any protruding parts. It's easy to jump over it without getting caught on anything painfully," he chuckles. "And then there's the operating handle you won't find this quality and ease of operation in other brands.

A large part of the required barn equipment had been decided on in advance. The final details were worked out afterwards. "The cubicles and the feed fronts were all chosen beforehand. Cow traffic flow in the barn was a bit more difficult. The dealer gave us the opportunity to work out the final details during assembly. A number of extra partition barriers were delivered on the condition that the unused fences could be returned to the dealer."

Kosters has every reason to be satisfied with the project. He has a beautiful Hörmann barn with two open sides, lots of light and air. In addition to the two feed alleys and six rows of cubicles, the barn contains two straw pens and a separation area. Except for the cooling tank, all the necessary machines are located above the indoor office, so that the yard remains spacious and uncluttered. The successful construction translates into quiet, healthy cows and an increase in milk yield. Kosters’ current milk yield is 9,300 litres with 4.2% fat and 3.55% protein. The objective is to efficiently increase this to 10,000 litres.