Dairy Housing specialist Spinder from Drachten (Netherlands) won a silver medal for the Autolift at Eurotier 2018. The automated gate is now in operation, among others at dairy farm Van der Wal in Boornburgum (Friesland, The Netherlands), with no less than 500 cows that are being led by the Autolift system.

Feeding, milking, filling deep litter cubicles; many processes on the dairy farm can be automated nowadays. Until recently, opening and closing gates took a lot of work. The larger the farm, the more time was spent. Moreover, it is a job that has to be done more than once a day.

This is also the case at the dairy farm of Van der Wal in Boornburgum. In 2018 they built a new barn with 510 deep litter cubicles. The barn is 130 meters long and 55 meters wide. Opening and closing the gates manually would take quite some time. Jelmer Hilverda, owner of Hilverda Staltechniek and also dealer of Spinder Dairy Housing Concepts, was closely involved with the construction. Haye van der Wal’s wish was primarily to save labor. The farmer uses the TMR-system (Total Mixed Ration), so the ration is adjusted to the average milk production per group. The cows are led to the milking parlor in groups. For that purpose, Hilverda and Van der Wal came up with a gate that could move up and down electrically.

The idea stemmed from two electrically operated draw gates that Van der Wal had made himself and that served for about 15 years in the old barn. This gate was raised and lowered with an electrically powered winch. It works, but it is too slow and not automated. Ultimately Hilverda transferred the project to Spinder, who subsequently developed the Autolift.

Van der Wal initially had reservations about automating the gates. It seemed a bit exaggerated to him. However, due to the labor savings it now yields, he is highly satisfied. And there is an additional advantage the dairy farmer had not initially thought of. Haye van der Wal: “We actually don’t have enough room to feed. When a group of cows is eating at the locked feed front, we close the gates. When switching the groups over, we release the cows from the feed front and open the Autolift gates. This way all cows have the same amount of time to eat.”

The principle of the Autolift is not complicated. The gates are powered by a 0,37 Kw worm gear motor. The gate itself consist of a pair of sturdy steel 3 thumb (88,9 mm) uprights and 2 thumb (60,3 mm) steel bars, and counterweights that are incorporated in the uprights. The only requirement is a minimum height of 4 meters where the gate is placed. The Autolift is available in three different widths: 270-330 cm, 330-440 cm and 440-550 cm. The gates are equipped with a sliding part that make it possible to install at exactly the right width. If you want to operate the gates with a mobile application, all gates are connected to the control box.

The control box itself comes in two varieties:

All technical parts are installed at the top of the gate, at about 4 meters up. The risk of a cow damaging something on the gate is minimal. In addition you can easily drive under it with a tractor without risk of damage.

The gates can be operated with the Spinder app, both per gate and per group. 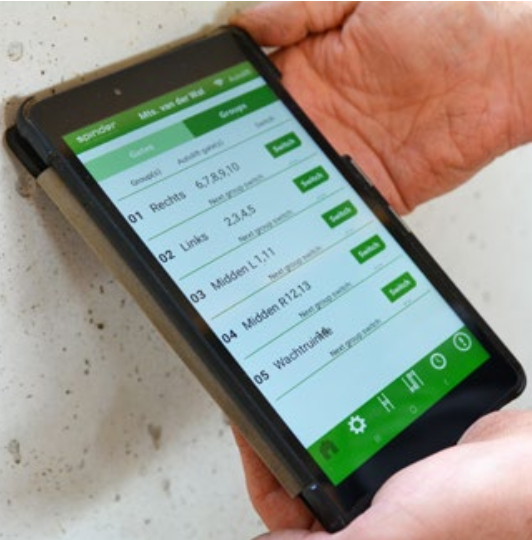 The Autolift system consists of several electrically driven draw gates that, if you use the mobile app, are linked together. The application for tablet or mobile phone was developed by Spinder itself. If you do not choose to use the app, you can operate the gates with a push button on one of the uprights. That button is also available if the gates are linked to the control box, as an additional form of operation.

You can operate the system per gate or per group of gates. If the cows have to be already in the waiting area in the morning, so that you can start milking right away, the timer in the app is a convenient option. You set this at the time when the first group is to be ready for milking. In the app you can see, even without a view of the barn, which gates are open and which are closed. This is indicated by the colors red and green. A limit switch that the gate pushes against when it is in top position gives the signal ‘gate open’. At the same time that switch ensures that the gate is stopped at the right position before it hits the top bar.

In the application you can pre-program different configurations. For example, you can indicate that gate numbers 1,2,5 and 7 must be opened at the same time by pressing a button in the app. The installation takes more time, of course, if installing more gates. The control box requires a 230 Volt connection. In addition the control unit of each gate must be connected to the control box with an eight-core cable. This is not necessary is you do not wish to connect the fences to the mobile app, because then the push button is sufficient. If you do link the gates via the app, the installation of fourteen gates – as wit Van der Wal – is quite a job. The control box creates its own closed WiFi network in the barn. To prevent the connection to the Autolift from blocking for example WhatsApp messages, the Autolift’s WiFi network is in sleep mode when the app is not in use. The Spinder application currently only works on Android. An IOS version is in the works. You can only operate the gates with the app is your phone is within range of the Autolift WiFi in the barn. A dairy farmer cannot operate the gates from the living room. However, it is possible to install an amplifier if the distance between the barn and milking parlor is too big. Van der Wal has chosen for this option, so that he can lead different groups while standing in the milking pit.

Keeping up the speed during milking is important because it is not good for the cows to be in the waiting area for too long. "We take that into account", says Van der Wal. "We milk in groups in a 2x26 milking parlor. As soon as the first group is in the waiting area, we lower the backing gate. Then we open the Autolift gates for the next group, so they can follow. In this way the milking does not take more time than needed." 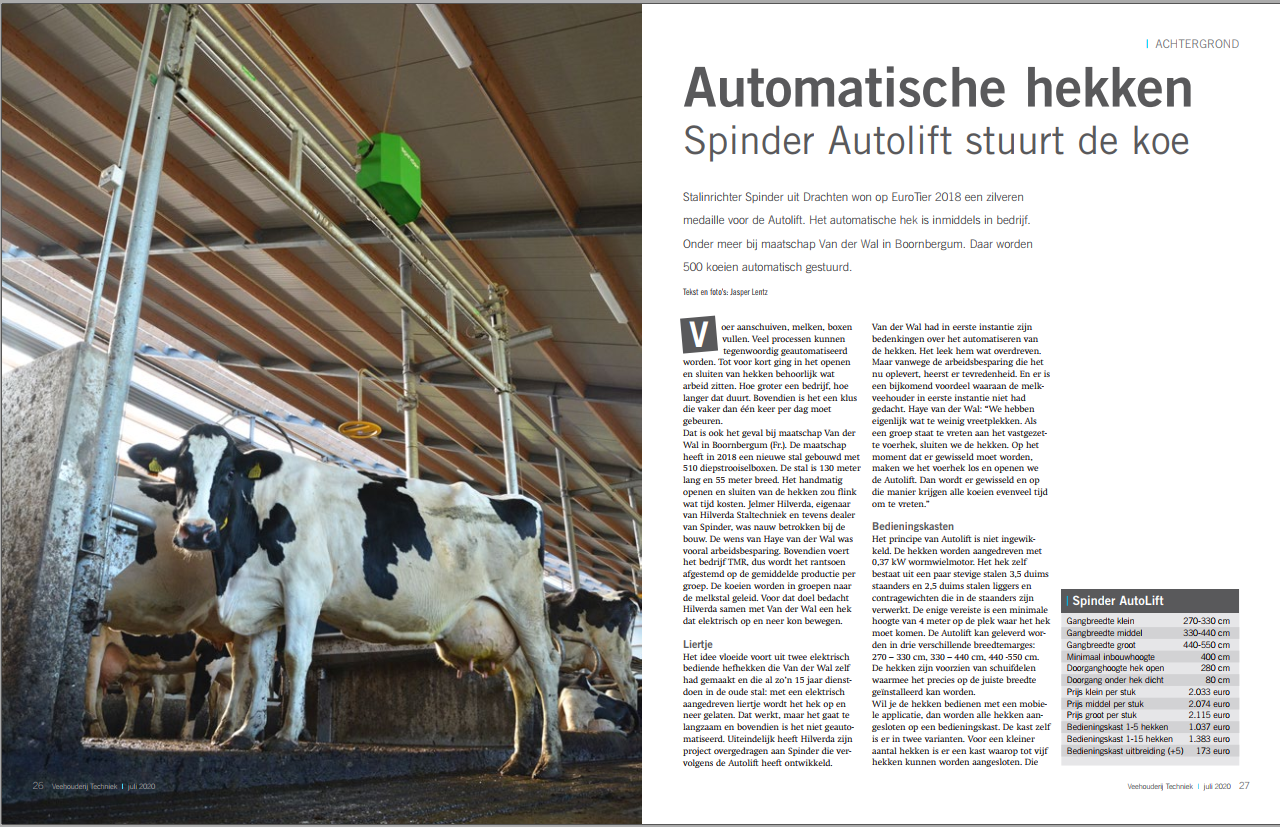