If it was up to Hubèr Timmermans of Spinder Dairy Housing Concepts, gas detectors would be mandatory within the foreseeable future for all technical personnel who work in and around cow barns.

He himself has tried to create support for this among mechanics and livestock farmers by wearing a gas detector visibly whenever he visits a barn, "but there is still a lot of work to be done". As a member of Fedecom's Livestock Farming Technology Department Timmermans took part in the working group "Working safely in the barn and its surroundings". Last year, on behalf of Fedecom, the working group went looking for suitable equipment that could give mechanics and other visitors to farms early warning of any risky situations while work is being carried out in and around the barn. While safe work practices in (dairy cattle) sheds and surroundings, or actually dealing safely with slurry gases, are gaining popularity, they are still not the general rule. 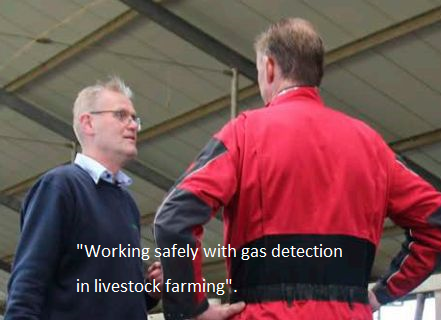 Timmermans noticed that becoming aware of the dangers of the invisible and often odourless slurry gases was the biggest challenge. "People tend to think that nothing will happen that quickly. Yet the dangers can catch you unawares." After participating in the working group, he purchased some compact portable multi-gas detectors to protect his own technical personnel and to make them aware of the dangers. "Every Fedecom member can buy these at an attractive discount from Veiligheidstechniek Nederland (VTN).

Slurry gases and particularly the colourless hydrogen sulphide or H2S, which at low concentrations reminds you of rotten eggs, can be an unseen but very real killer, despite good precautions. Both Timmermans and dairy farmer Anton Stokman in Koudum (in Friesland) observed that it was mainly in the unventilated corners close to the floor where slurry gases tended to accumulate. "But also in places like a slatted floor and in the trench along the weighing floor of the milking robots in one of the two robot rooms there is danger because of the chimney effect", says Stokman. The gases and vapours at times even manage to corrode and destroy the copper connections in the electronics cabinet. Stokman tackled this by using the compressor to put a slight overpressure on the cabinets.

Stokman carries out many tests on his farm with 280 dairy cows and also regular projects involving government agencies and fire brigades such as the "Gasses on the farm can do unexpected harm" project. "During one of the tests, some firefighters and I were standing outside, five metres away from the slurry pit, the wind force was 8, while a farm hand on the tractor was mixing with the rear window open. Everyone involved was wearing their own gas detector. As soon as the farmhand stopped mixing, all the detectors immediately gave an alarm even though no-one had noticed the gas that had formed. As was discovered later, as soon as the mixing had stopped, a certain amount of slurry pushed all the gases out of the pit. It took everyone completely by surprise!"

According to Timmermans, awareness also requires perseverance on the part of technical personnel who work with an array of machines and equipment: milking machines, milking robots and slurry scrapers, as well as around silos and tanks, and likewise on the part of dairy farmers and their families. "I want my technicians routinely to wear a gas detector when they enter a yard or a barn to carry out work. What if the alarm goes off and my technician cannot do his work? How does the farmer react to this?" According to Stokman, dairy farmers are well aware of the dangers of slurry gases and if they wear a gas detector this would be understood and could also contribute to increased awareness and recognition of the dangers of slurry gases among dairy farmers.

You can’t put a price on safety!

Timmermans can readily understand that the (annual) costs of a good gas detector put people off despite the Fedecom discount. "In addition to the initial purchase, there are annual costs for calibration and the replacement of sensors if needed. Calculated over a period of six years, the average annual costs amount to €225.00 to € 250.00. Though you may not be able to put a price on safety, handling slurry gases safely does not have to cost more than €250.00 per year!

When asked whether dairy farmers were also likely to purchase a gas detector for their own safety, Stokman answers ‘yes’ without hesitation: "What is crucial, however, is the procedure surrounding its use. This should be simple and almost self-evident.

When should gas detectors be used?

According to Timmermans and Stokman, gas detectors provide added value anywhere on dairy farms and around slurry silos, but above all: