From calf to cow; each group has its own specific layout

As mother of two small children, owner of a milk vending machine, insemination technician at Repro Plus and farmer’s wife, 30-year-old Marianne Deelstra from Reitsum devotes her whole life to her family, their farm and the farming life. Together with her husband Jenne and his parents she milks no fewer than 300 cows and they have 200 young cattle. "I love doing all these things, and as long as I can successfully keep juggling all these tasks, I see no reason to drop any part of my work."

We have our coffee in the canteen which is located in the dairy barn. In the corner of the canteen is a pram in which the youngest Deelstra is sound asleep. The canteen is slightly elevated making it easy to keep an eye on the herd. "During working hours we usually always sit here, also with consultants and workers, rather than at the kitchen table. This way our work and private life are kept successfully separated. And it is also easier for us to observe the cows from here. When we sit here, we will often notice something: a cow in oestrus or a cow which doesn’t seem to feel well."

The barn was built in 2014, but not without a considerable test of our patience; the permit took a total of 7 years because of various objections. Once the barn was finished, it was immediately filled with the number of cows for which we had been issued a permit. This turned out to be a stroke of luck: on the phosphate rights reference date, the Deelstra family had almost completely filled the barn and they were granted sufficient phosphate rights. "Also because of the 12 hectares of land with phosphate rights that we had purchased, we only had to reduce our herd by a few cows. We did this by disposing of older cows. This initially led to a drop in the average age of the cows, but now we are starting to see a slight increase again." 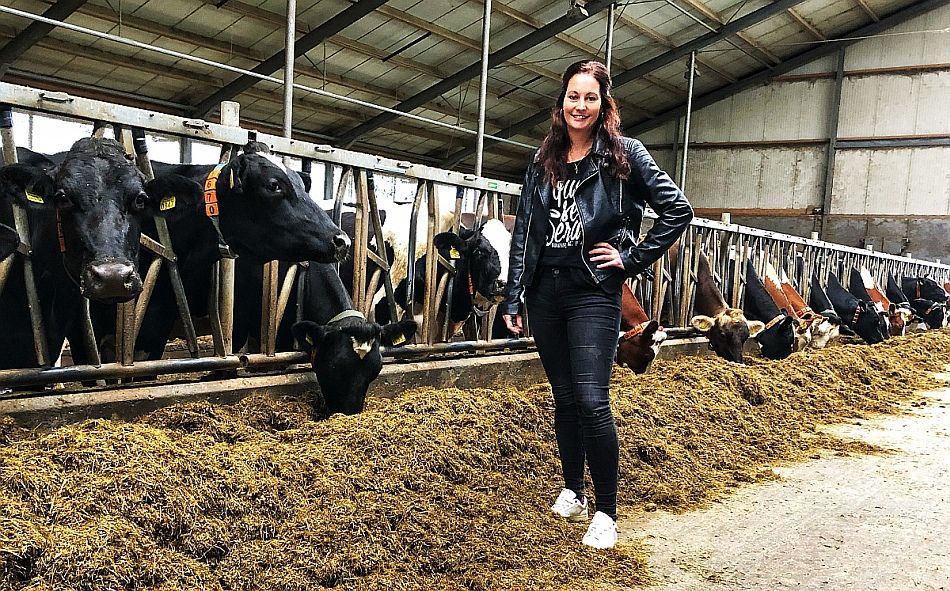 They have recently started milking three times a day again. "We know from experience that the yield will increase to approximately 10,500 kg of milk. What’s more, we get the impression that it is helping our cows to stay healthy. It just works better this way," says Marianne. A milking session takes about 2 hours with the 40-stall rotary platform from Delaval. Not only does Jenne like to do the milking himself, he also considers it important to see every cow every day. "This way, we pay extra attention to our cows and we soon notice when something is wrong with a cow.”

Milking three times a day not only provides extra income, which comes in handy now that Jenne's parents are gradually withdrawing from the farm, but also gives the family the opportunity to spend more time together. This doesn't immediately make sense; more work and yet more available time. The solution is the milker who takes care of the third milking every evening. Jenne milks at 5:00 a.m. and in the afternoon from 1:00 p.m. to 3:00 p.m. someone else takes care of the milking. In addition to this milker, they employ another permanent worker. Here too the family is well aware of the benefits." This means we can also take time off or go on holiday." 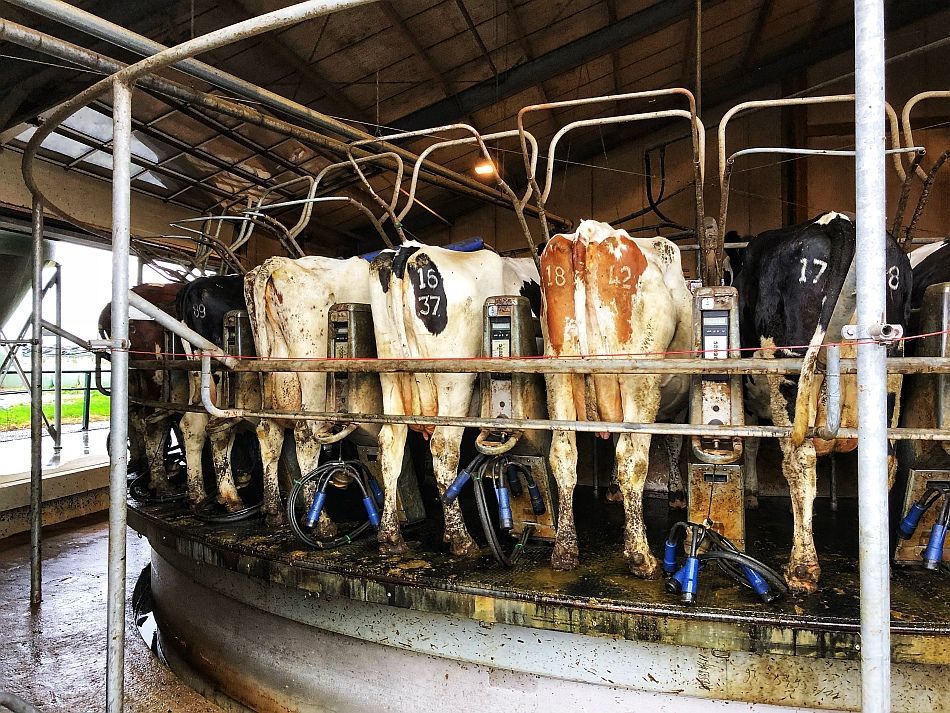 Part-time insemination technician at Repro Plus

Marianne doesn't come from a farm herself. Instead she learned farming from a neighbour. From the age of 14 till she turned 24 she was a regular milker on his farm. This was a time in her life of which she has fond memories, at time when she learned a lot. In addition to milking she also learned how to inseminate. When the neighbour bought a milking robot, Marianne lost part of her work. She took a job at Repro Plus as an inseminator - full-time at first, but these days around 15 to 20 hours a week in addition to her work at home. "The group I work with – all men - are a very pleasant bunch. A big advantage for me is that my work at Repro Plus regularly takes me to other farms. As far as your own farm is concerned, you soon stop seeing things and if you take a look at what another farmer is doing, you will see useful things that you could also apply at home. Sometimes I also see beautiful animals and I would love to try a straw from them at home." On the odd occasion, the Deelstras win a prize, but up till now they have not focussed on breeding and judging competitions. "Our daughter likes the cows very much so, who knows, we might participate in calf judging competitions in the future".

The Highline feed front in the barn comes in very handy when inseminating at your own farm. The feature that keeps a specific cow secured is particularly useful for this. "If we are not at home ourselves, someone else will come and inseminate the cows and that may take some time. But not every cow has to be kept secured." If the insemination fails, there is always a bull on the farm. The cows that are difficult to get pregnant will have another chance with him. A ‘brute’-proof Spinder bull pen was installed in the barn. "It is important that you can work safely with a bull, even though the bull we have at the moment is fairly young (and therefore not very big yet). First we secure the bull in the feed front of the pen. Then we let the cow in, and we don’t release the bull from the feed front until the pen is closed. Safety always comes first. Also for the bull of course; rubber on the floor ensures that the bull can serve the cows safely."

From Calf to cow: each group has its own appropriate layout

The young cattle are housed in the old farmhouse. A long row of calf pens fills the entire wall and the former milking parlour: both single wooden pens and plastic pens are used. "We have enough single pens available so that the calves can be accommodated in them for at least 3 weeks, but sometimes up to 5 weeks, before they join the group. The pens are cleaned thoroughly after use and are left to dry for some time before we use them again."The calves from the group are moved to the old freestall barn at the age of about 4 months. This barn was completely rebuilt in 2018. "Actually, only the stalls were left in place but part of the walls and the roof, which had been covered with asbestos, were replaced." In this barn the calves learn to lie in the cubicles. The youngest groups still use a feeding tube, but the older groups are already being introduced to a feed front. The calves go through various group stages and eventually take their place in the dairy barn as cows.

The dairy cattle lie on mattresses that are covered with sawdust once or twice a week using a spreader. "We found deep litter too laborious and with too many associated costs; our experience with mattresses has been very favourable and so far, our cell count is low." The Profit freestall dividers are sturdy and have sufficient headroom. With the waved neck bar the cows have enough space to stand up. Almost the entire barn interior layout was installed in one evening with the help of friends and workers. "There was one person who had experience with the installation of barn equipment. He gathered the parts together, set everything out in its proper place and gave the orders. Thanks to his expertise and to systematic work, it was quite easy to assemble the fittings ourselves."

Showing how things are done on the farm

Since April this year, a so-called milk vending machine has been installed in the yard. In addition to milk from their own cows, they also sell eggs (from their own chickens), jam, pancake mix and other items. At first it was mainly people from their own village, but meanwhile people from the surrounding area have also been discovering the milk vending machine. "It's not even a lot of work, you just have to establish a routine. When our milk tank is emptied, I immediately clean the milk vending machine as well." As a result, the milk is always fresh, and customers can safely keep it for a few more days. Last summer, they sold a lot of ice creams and a picnic table was provided outside. The grass area near the milk vending machine was filled with wild flowers. "This way we show everyone in the area that as farmers we produce real and honest food and also contribute to biodiversity. People who are curious about what goes on on the farm are very welcome to come and take a look here." 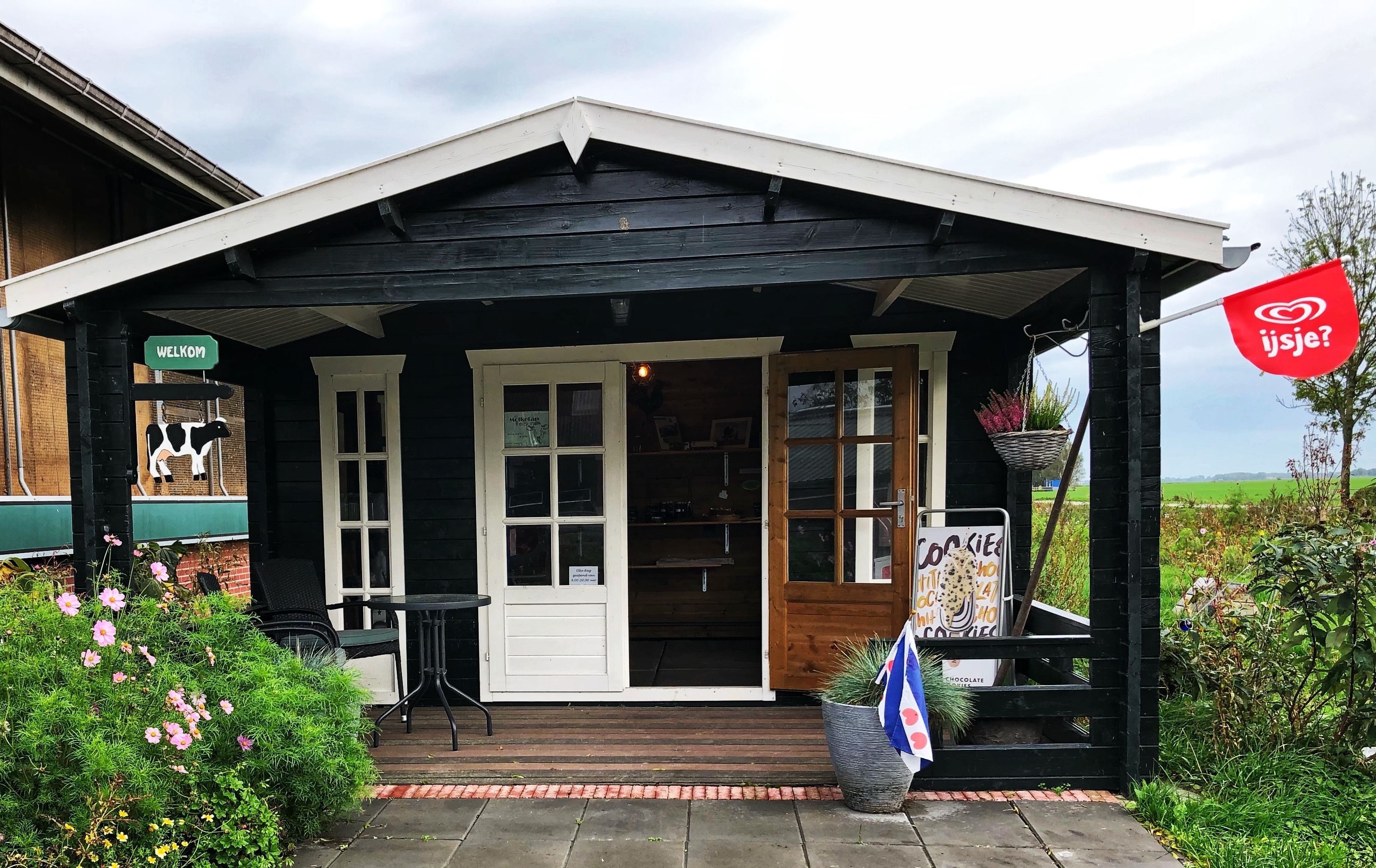