Waterbeds have increased milk production by 4 kg per cow per day.

Performance at Bøgeskovgaard near Brørup has almost exploded since dairy farmer Gert Trøst Hansen installed Dual Waterbeds (American DCC Waterbeds) last year, the first Dane to do so. First with the fresh and dry cows, and about three months ago with all lactating animals.

By Tenna Bang (Published in Effektiv Landbrug)
It is almost like an advertisement in which an actor is paid to say only positive things, but that is not the case. Here we have a satisfied dairy farmer in the southern part of Denmark who can only speak for himself and has now ordered his third consignment of waterbeds for his cows - simply because they work. This dairy farmer is Gert Trøst Hansen; in January 2018 he took over running of the Bøgeskovgaard near Brørup.

More than 200 mainly red and white cows, which are gradually being replaced by black and white animals, fill the large barn, which will eventually also house the dry cows and some of the heifers. Eighteen months after he started, he has already bought a second farm, a farm where they are currently milking 135 cows, but where all young cattle and dry cows will be housed in the longer term, while Bøgeskovgaard will house all the dairy cows. 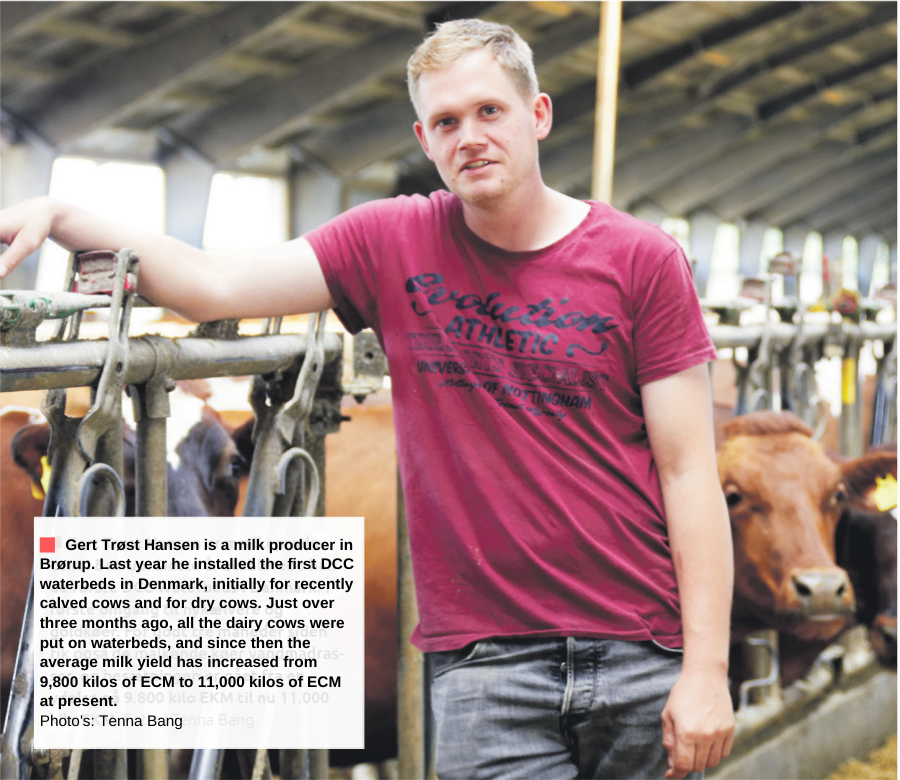 What was initially frustrating in Bøgeskovgaard was that the bedding was so badly worn that the cows were just about lying on bare concrete. Gert Trøst Hansen experimented with moss cubicles and it worked well, but the cell count went up to too high.Sand was not an option, because the cow manure is supplied to a biogas plant. New mattresses were also not considered, because Gert Trøst Hansen could not find a product that would meet his sustainability requirements. Frustrated about what his cows should then be lying on, Gert Trøst Hansen contacted some American friends he met during a study trip to Canada in 2009. "I asked them what to do and they didn't hesitate. One of the farmers had installed waterbeds 20 years ago, and they were still in use." Gert Trøst Hansen immediately searched for and found the waterbeds on Google and YouTube.

Waterbeds for fresh and dry cows

In May last year, Gert Trøst Hansen was the first in Denmark to install the American DCC Waterbeds for recently calved and dry cows: a total of 54 cubicles to experience the use of the waterbeds. “I saw a video on YouTube that showed that they simply won’t develop a leak, even if you stick a fork into them.” The young farmer tells us with a smile how he got three men together and how they stuck forks over and over again into the mattresses, but nothing happened. The first test was successful, while it was also evident that the recently calved and dry cows enjoyed lying on the waterbeds.

Bøkkesovgaard noticed that the cows on the waterbeds were lying better in their cubicles.”The cows don't put their legs in their neighbour's cubicle, they don't lie diagonally in the cubicle or against the cubicle partition,” Gert Trøst Hansen commented. Surprisingly, heat stress in the cubicle last summer was not a problem either, but it was the heat at the feed front. “You could clearly see that when the animals were lying on the waterbeds they were able to get rid of the heat,” he says.

A queue for the waterbeds

The positive experiences with the dry and recently calved cows led to waterbeds being installed in May this year for the rest of the dairy cows in their area as well. This was done during the cows’ walking time in the barn. “There were rips in the mats when they were removed for the installation of the waterbeds. We had to quickly fill the beds with water, the animals were so eager to use them. There were a few cows waiting each time," laughs Gert Trøst Hansen. It was clear that the waterbeds were an instant favourite.

Production has increased by 4 kilos per day per cow.

Production has shown a substantial increase, an increase that is somewhat unreal for the young dairy farmer. He shakes his head and smiles, explaining that the cows have gone from a yield of 9,800 kilos of ECM to now achieving as much as 11,000 kilograms of ECM. “I haven't changed anything except that they are now lying on waterbeds. The cost per cow is still the same, 42 Kroner per cow per day,” says Gert Trøst Hansen. And with an average production now of 33.6 kilos per cow per day - 4 kilos more thanks to the waterbeds - this sounds like music to Gert Trøst Hansen’s ears. And that’s with daily milking intervals of 11 and 13 hours. It's mainly the older cows that enjoy the full benefits of the waterbeds, and according to Gert Trøst Hansen's calculations, production of 12,800 kg of ECM is achievable in the near future. 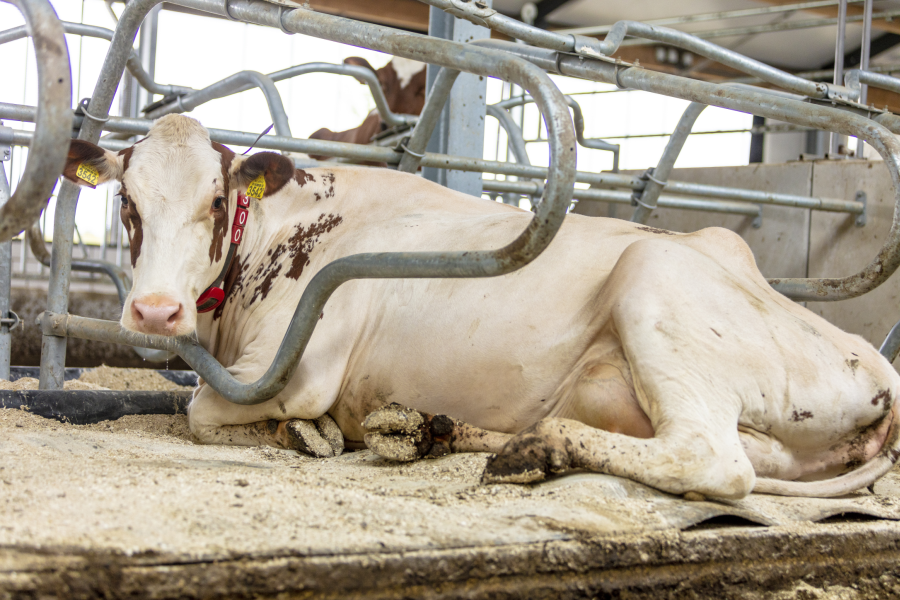 Pressure sores and bald or damaged hocks are a thing of the past since the arrival of the waterbeds at Bøgeskovgaard. “See that one there,” says Gert Trøst Hansen, pointing to one of the cows, “she has always had swollen hocks, but no longer. And it has been exactly the same with that one. The older generation of cows has clearly benefitted. Now you see more cows without painful legs and hocks in the milking parlour! “That one over there now gives 70 kilos of milk a day,” says Gert Trøst Hansen. "When we trim the herd’s hoofs, we also notice the change; much less damage, much more pleasant,” says Gert Trøst Hansen.

In Bøgeskovgaard Gert Trøst Hansen has experienced a significant change in the behaviour of the herd now that all the animals have been able to lie on waterbeds since May. “When I do my rounds in the evening, they are all lying as they used to before, but during the day there is much more natural behaviour in the barn. Previously they used to do everything at the same time, and they probably chose to lie down more out of necessity than desire,” explains Gert Trøst Hansen. “I think it's much more peaceful in the barn,” he says.

Even though the dairy cows have been on the waterbeds for only a short period so far, the improved leg comfort and the changed herd behaviour have had a positive influence on the fertility of the herd. Gert Trøst Hansen believes that cows show more clearly which animals are in oestrus and that cows return more quickly to a good rhythm after calving. This has resulted in a higher pregnancy rate after first insemination. “This is clearly due to the fact that the cows now have better balance. Their leg comfort is better and because of the changing herd behaviour they move more,“ Gert explains.

Investment paid for itself after 6 months

A DCC waterbed costs DKK 1,600 plus installation by Grotrian A/S, a Danish importer of American waterbeds. “An increase of only 4 kg per cow generates an additional income of DKK 3,500 per cow per year, so the investment pays for itself after six months,” explains Gert Trøst Hansen. In addition, there are the other positive economic benefits, such as better hocks and legs, better reproduction, and so on. The young dairy farmer has estimated a life span of 15 years for the waterbeds in his budget, knowing that the waterbeds installed in the United States in the 1990s are still in use. “If they last 15 years, a waterbed including installation will cost me 66 øre per day per cow,” says Gert Trøst Hansen.

It does not take long before Bøgeskovgaard is refurbished, with the recently calved animals and dry cows moving to the other farm, while the 135 dairy cows that are still there are brought to Bøgeskovgaard. For this reason, it is now necessary to create calf pens and normal cubicles in which waterbeds will be installed, of course. “I cannot say anything negative about the waterbeds. One of my employees finds it harder to clean the waterbeds because they move, but I haven't noticed,” says Gert Trøst Hansen. The waterbeds are sprinkled with  straw bedding and dried lime once a week, as opposed to twice a week for the old mattresses. Gert Trøst Hansen is finding that he has cleaner stalls than before, because urine and milk residues run off the waterbed.