'The app is coming to the farm'

Those who wish to take a look at the new location of Spinder Dairy Housing Concepts in Drachten had better bring their bike. To ride indoors, that is. That says something about the magnitude of the place where the dairy housing experts have been working since August. "We are ready for the future and more intensive internationalisation", says CEO Jehannes Bottema as a matter of fact. The waterbeds for cows that he demonstrates to us are nothing unusual to him. "Innovation is part of our trade". 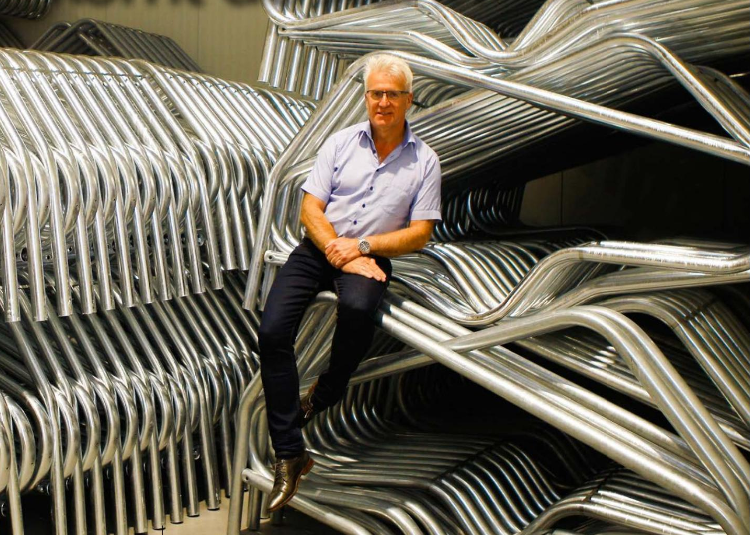 Innovation gives rise to commotion. Especially in the case of Spinder. "People are talking about us, not only because of the relocation, but also because of our award-winning ideas." The Cuddlebox for cows and calves was a winner at international exhibitions, as was the automatic safety system for feed fences, based on an app. "The app is coming to the farm. We foresee a move from the milking robot to smarter robots that are able to perform more complex operations at the touch of a button. Together with our partners, we spend much of our time and energy on innovation."

Comfort for cow and customer

Spinder manufactures ever smarter furniture for the freestall barn, the everyday surroundings of the cow. Bottema: "That is where the cow rests, eats, drinks and relieves herself. Other than being milked a couple of times a day, she is inside or outside the barn. We look after her well-being by making the livestock housing as comfortable as possible." A concrete floor is too hard for the cow. The farmer wants her to be comfortable for a longer life span and better milk yield. "An English farmer invented the waterbed. We developed it further, together with the Dunlop rubber factory. In addition, together with Avek mattress factory, we use mattress remnants to produce cow mattresses. This is a good example of reusing materials and giving customers a choice".

Spinder has almost everything in stock to make sure that customers do not have to wait long for their orders to arrive. That is the reason why the company, founded in 1973, relocated from Harkema to Drachten. "The size of our warehouse makes it necessary to strongly formalise our logistic processing." Bottema calmly explains that he runs a team of fifty people. "Our people are committed, and many of them have been with the company for many years. They are the strength of our company."

Spinder combines its own ideas with those of vets and farmers. “Together with veterinarians we developed the award-winning Cuddlebox, where the cow and her calf can be close together. Cow feed is thrown onto the calf, forcing the cow to lick her calf and give it her attention. The cow is also milked in here, so she does not have to leave the calf." The feed fence, where the cow sticks her head through the fence to eat, is also a top product of Spinder. "The Netherlands is at the forefront of such developments. However, the Dutch market is less positive because of the rules on phosphate and nitrogen".

That is why Spinder decided to cross the borders in 2016, when Spinder Stalinrichting became Spinder Dairy Housing Concepts. "Dairy housing is voluminous. Our market is mainly in Europe, or else the transport costs will be too high". Every year, we supply some 11,000 waterbeds and thousands of metres of feed fence. Our warehouse in Harkema alone holds 65 kilometres of tubes in stock. "We are able to supply whenever the farmer asks for it. That is because the farmer thinks straightforward, "My barn is this big, and it has to fit in there". The farmer chooses what he needs from our wide range of standard and custom components."

Spinder is committed to cows; other animals are not even considered. "We do not have to expand our business. We just want to grow and serve other countries more intensively. But we also like to work with companies in the region. We do not have to get products from far away if we can get them from next door." Bottema looks satisfied around, with the Harkema birthplace at just a stone's throw away and Spinder in Drachten focusing on export and the future. Good times are here to come. For Spinder, as well as for the cows.